Patient empowerment as a new trend in drug development: beyond the goal of ISPACOS

Drug development requires a considerable amount of financial and intellectual resources and long-term efforts. It is a risky business and only so-called mega pharma are said to succeed. However, middle-sized companies and ventures are doing very well. One of the reasons might be that, although seed compounds are limited, clinical demands for new medicines are rapidly expanding and new medicines responding to such demands make their way to a breakthrough. Both for an over-the-counter drugs and prescription drugs, the end-user or the consumer is a patient. However, as yet, consumer satisfaction with medicine has not been fully achieved. In this short essay, activities of ISPACOS (International Society of Patient-Centered Oncology Science) since its establishment in 2018 will be illustrated. Five international symposiums have been organized by ISPACOS focusing on cancer therapy. To achieve a more patient-centered approach, it will be essential to strengthen the connections between three important groups: patients, professionals in charge of treatments, such as physicians, nurses, and pharmacists, and professionals in charge of drug development, such as researchers and regulators.

2. Progresses in cancer medicines have been remarkable in the 21st century

In 2001, a new anticancer drug based on a genomic change, a so-called molecular-targeted drug, was introduced. In Japan, this drug, Imatinib, was approved and available on the market in the same year. It was also in the same year that trastuzumab, a therapeutic antibody, was approved for the treatment of HER2-positive breast cancer. The development of molecular targeted therapeutic drugs has continued since then. A string of breakthrough drugs have been approved in about three years especially in the field of breast cancer. Those drugs are PARP inhibitors, CDK4/6 inhibitors, and an antibody drug conjugate from which a strong anticancer agent can be released inside of HER2-positive breast cancer cells.
Not limited to cancer drugs, the most important requirement for new drugs to be approved and marketed is that the benefit significantly exceed the risk. Since cancer is a life-threatening condition, criteria for cancer drugs in the past were that the benefit meant an improved survival rate and the risk meant the occurrence of life-threatening side effects, though this statement is oversimplified. However, the situation has changed as the improvement in therapeutic efficacy of new drugs itself leads to new demands. The reason simply is that more patients are willing to receive treatments that improve their quality of life. Breast cancer, in particular, has a peak for the first onset at a relatively younger age compared to other cancers. It is natural that patients in this generation want to devote themselves to working and parenting, even during the anti-cancer treatment, which tends to last long.
Considering the processes of development, approval, and appropriate use of cancer drugs in the future, several important points emerge. First, it is necessary to closely observe and take action on the levels of positive effects and negative side effects experienced by patients of the drugs that are currently in use. When there are patient-to-patient differences in the reported effects, it is quite possible that these difference are based on genetic polymorphisms or on interactions with other drugs being administered at the same time. The other point is that, even with new drugs currently under development, it is necessary to pay more attention, at all stages of drug development, to any side effects beyond those which are predictable from the conventional pathological and toxicological examinations. These new trends are eminent to anyone involved in the proper use of drugs. However, to those who are engaged with innovative drug development, regulators and researchers, a dramatic increase in listening to patients' voices is necessary.

International Society of Patient-Centered Oncology Science (ISPACOS) was established in 2018 through the initiative of Professor Mitsue Saito, Department of Breast Oncology, Juntendo University School of Medicine. ISPACOS aims at forming a platform that can be joined easily by patients and their families, healthcare professionals, company employees involved in health-care products, scientists, especially drug development researchers, and regulatory officers. We always use a common language to communicate and aim to achieve a common goal for better cancer care. In fact, from the beginning, diverse people with diverse backgrounds participated in its operation. An overview of ISPACOS can be found on the website (https://ispacosj.wixsite.com/ispacos).

The first ISPACOS symposium was held on December 29, 2018. Since then, five symposiums were held twice a year. The most recent one was held on November 28, 2020. This was a web conference organized by a team based in Bangkok, Thailand. Programs of these meetings are available on the above website. The concept underlying ISPACOS is based on the close collaboration and open communication among those who are involved in healthcare, regardless of their rank or positions, and on erasing existing borders to achieve a long-term perspective. 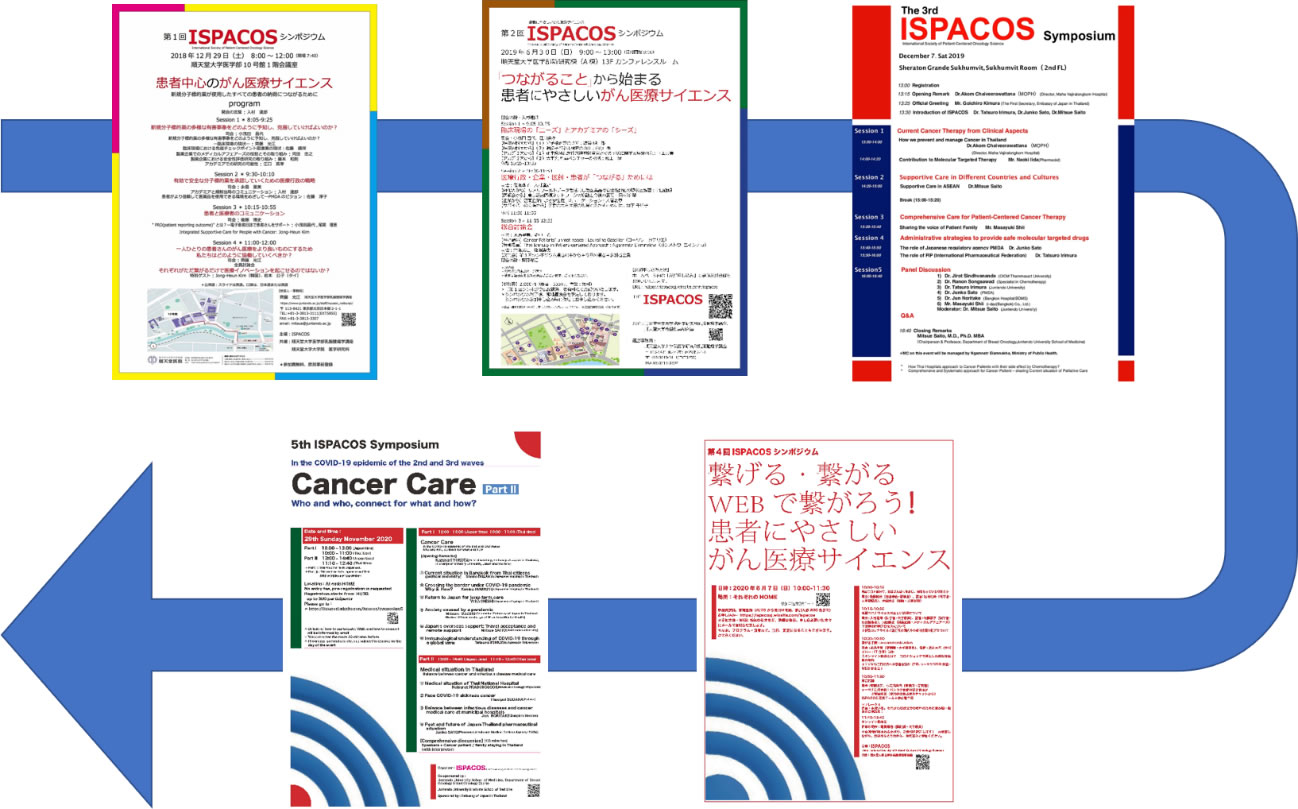 In the second symposium, the live voice of cancer survivors captured the minds of the participants and had a strong impact. At the social gathering after the second symposium, a cancer survivor pointed out that when cancer drugs, which are prescribed only to cancer patients with a certain genetic background, were handed over and explained in a local pharmacy, her genetic privacy was violated. Based on this patients' voice, ISPACOS prepared a statement and requested the Japanese Pharmaceutical Association and the Japanese Society of Hospital Pharmacists that the practice at pharmacies to be improved. This resulted in a cautionary statement to the prefectural Pharmaceutical Association as a document. The third symposium was held in Bangkok, Thailand, and with it ISPACOS has become a real international association. We all realized how important and productive it is to consider cancer treatments at global levels.
In 2020, under the COVID-19 pandemic, both the 4th and 5th symposium were held completely web-based. The fifth meeting, in particular, was delivered simultaneously from Bangkok and Tokyo. In both of the meetings, "cancer care under the COVID-19 pandemic" was the theme. These symposiums proceeded with many participations being cancer patients and their families. Real-time questionnaire surveys were conducted and a lively discussion developed based on the results of these questionnaires.

Patient empowerment is well visualized in ISPACOS symposiums. Pharmaceutical and regulatory agencies have already initiated to incorporate systems termed patient reported outcomes. In other words, the patients' voice is reflected in the efficacy evaluation during the process of drug development. ISPACOS focusses on discovering the real-life voices of cancer patients and to make them be heard. Another important point is that non-patient members then translate these patients' voices into the next scientific endeavor to improve drugs. We believe that it will become increasingly important in the development and in the proper use of cancer drugs that all the stakeholders, patients and their families, healthcare professionals, industry people, scientists, especially drug development researchers, and regulatory officers, communicate with each other and work together. ISPACOS aims at establishing and promoting such collaborations by raising awareness of its activities and goals.