African trypanosomiasis (African sleeping sickness) is a zoonotic fatal infectious disease caused by the parasitic protozoan Trypanosoma brucei (T. brucei, Figure 1) that infects humans and livestock using tsetse fly as a vector insect, and is one of Neglected Tropical Diseases designated by the World Health Organization (WHO). Tsetse flies are hematophagous flies that, along with blood feeding, infect the body of livestock and humans with trypanosomes. Initially, mild symptoms such as fever, headache, and muscle/joint pain appear, but in the late stage, disorders of central nervous system appear including confusion, seizures, difficulty walking, and sleepy symptoms (from the name sleeping sickness), and finally, patients fall into a coma, and almost 100% of patients die without treatment. It is estimated that approximately 60 million people are at risk for infection with African sleeping sickness in 36 sub-Saharan African countries, with more than 30,000 deaths per year. In domestic animals, the disease is called Nagana disease, and hundreds of thousands of cattle die annually. It is also known that zebras are less susceptible to African sleeping sickness because tsetse flies have the habit of avoiding zebra stripes. The prevailing theory is that zebras have evolved to avoid the infection of African sleeping sickness, resulting in a beautiful striped body.

Now, the drugs used to treat this dreaded African trypanosomiasis include pentamidine (which is internalized into the parasite via purinergic receptors and exerts enzyme inhibition on DNA), suramin (which is thought to inhibit glycerophospholipid metabolizing enzymes and pyruvate kinase), eflornithine (which is thought to inhibit ornithine decarboxylase), and melarsoprol (organoarsenic), but there are many problems such as serious side effects and the emergence of drug-resistant protozoa, and thus the development of new therapeutic agents with new mechanisms of action is highly desirable. 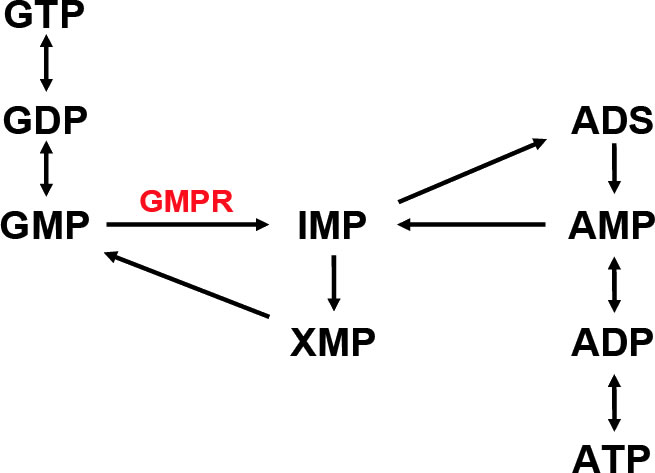 The synthesis of purine nucleotides in host animals involves de novo pathways that are synthesized newly from sugars and amino acids, and salvage pathways that are responsible for the recycling of purine bases and nucleic acids in cells. Because of the lack of a de novo synthetic pathway for purine nucleotides, T. brucei synthesizes purine nucleotides by the salvage pathway using nucleosides obtained from the host (Figure 2). As this pathway performs interconversion of guanine and adenine nucleotides and has an important role in maintaining the balance of these nucleotides, enzymes in the salvage pathway are considered to be candidate molecules for drug discovery targets. However, it is necessary to have different characteristics from the host enzyme. Our focus was on GMP-reductase (GMPR). GMPR is an enzyme on the salvage pathway that catalyzes the deamination of GMP to IMP using NADPH as a coenzyme. Because this function is important for maintaining the homeostasis of GMP levels in cells, the enzymes are also highly conserved throughout evolution. Surprisingly, however, we have shown that T. brucei GMPR (TbGMPR) is an allosteric enzyme and that binding of guanine nucleotides (GTP and GMP) or adenine nucleotides (ATP) to the cystathionine β-synthase (CBS) domain, a species-specific structure possessed by this enzyme, leads to positive and negative activity regulation accompanied by changes in the multimeric structure of the enzyme. Specifically, TbGMPR, a “relaxed 8-mer” conformation in the apo-form, is transformed into a “twisted 8-mer” by binding of GTP/GMP, while the binding of ATP disrupts the 8-mer structure to be a 4-mer, resulting in the inhibition of its activity (Figure 3). 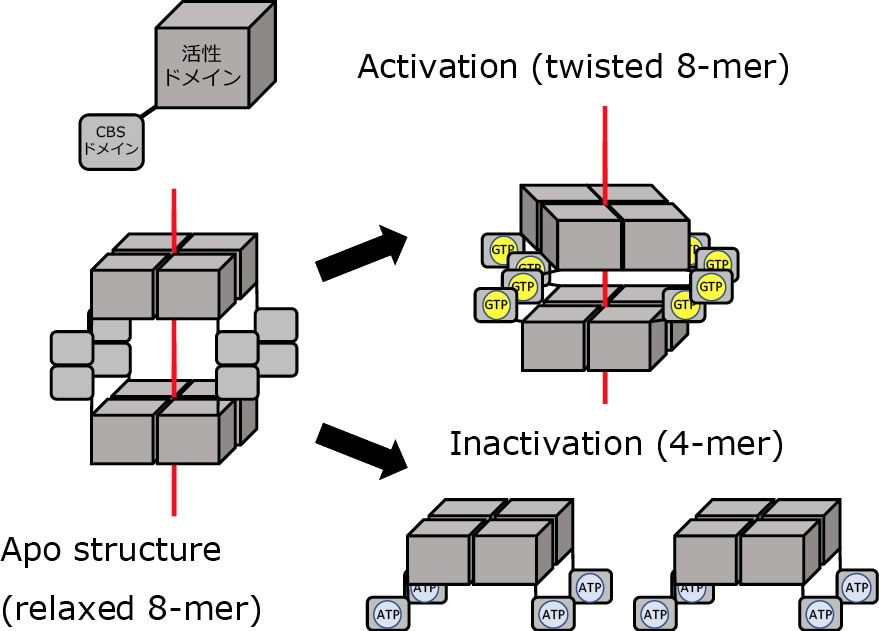 In conclusion, GMPR, which is thought to be conserved across species, has a unique CBS domain in trypanosomes, which plays a key role in ON/OFF of enzymes; therefore, we would like to seek seed compounds that specifically inhibit TbGMPR by targeting the CBS domain in the future and develop novel African sleeping sickness drugs that do not develop side effects on the host.