Beyond Next Ventures, Inc. was founded in 2014 and has invested in 36 R&D-based ventures, including those related to drug discovery. Various issues need to be addressed for commercialization of drug discovery seeds. In particular, one of the largest challenges is a lack of experienced businesspeople associated with bioventures.

The core strength of research-related startups is their high level of technology and technical skill. However, for commercialization, the founding researchers providing technical innovation to startups, including to pre-inception teams, must also engage in other aspects of project development that they have likely not experienced before. Specifically, they have to develop business plans, meet with investors, and negotiate collaborations with industry.

This is suboptimal because the researchers are forced to struggle business development, often with poor results, rather than devoting all of their resources to their core competency of technology development.

Occasionally, some researchers wish to participate in both management and research, but more typically, the researchers want to concentrate on their research, and leave the business aspects to a professional.

However, such a scenario is difficult to implement because the researchers have few opportunities of interact with business professionals. Specifically, researchers and businesspeople belong to two different groups that do not interact often. There is thus a need to create defined opportunities for such interactions

MBA programs at business schools overseas provide defined activities in which business professionals and researchers work together to create a commercialization plan. However, such programs are not common in Japan, possibly because humanities and science departments are located far from each other, both physically and socially, on campus.

The concentration of business professionals in metropolitan cities is another reason for the lack of opportunities for interaction, particularly for researchers at universities in rural or less-developed locales far from these cities. Even when such interactions are actively sought, they are hindered by further barriers such as travel time and cost. As a result, excellent technology is sleeping, even in local universities located throughout Japan.

To solve this issue, we are one of the first companies in the VC industry to hire in-house headhunters. These staff are actively engaged in matching research teams, into which we are investing or potentially investing funds, and business personnel.

As the Start-up Unit of the AMED Drug Discovery Support Network Units, we are currently working on a new approach to match business executives with researchers using an online platform called

Co-founders. This platform is open to all users at no charge, without being limiting to members of our portfolio, to resolve the lack of opportunities for researchers to team up with business personnel in Japan. 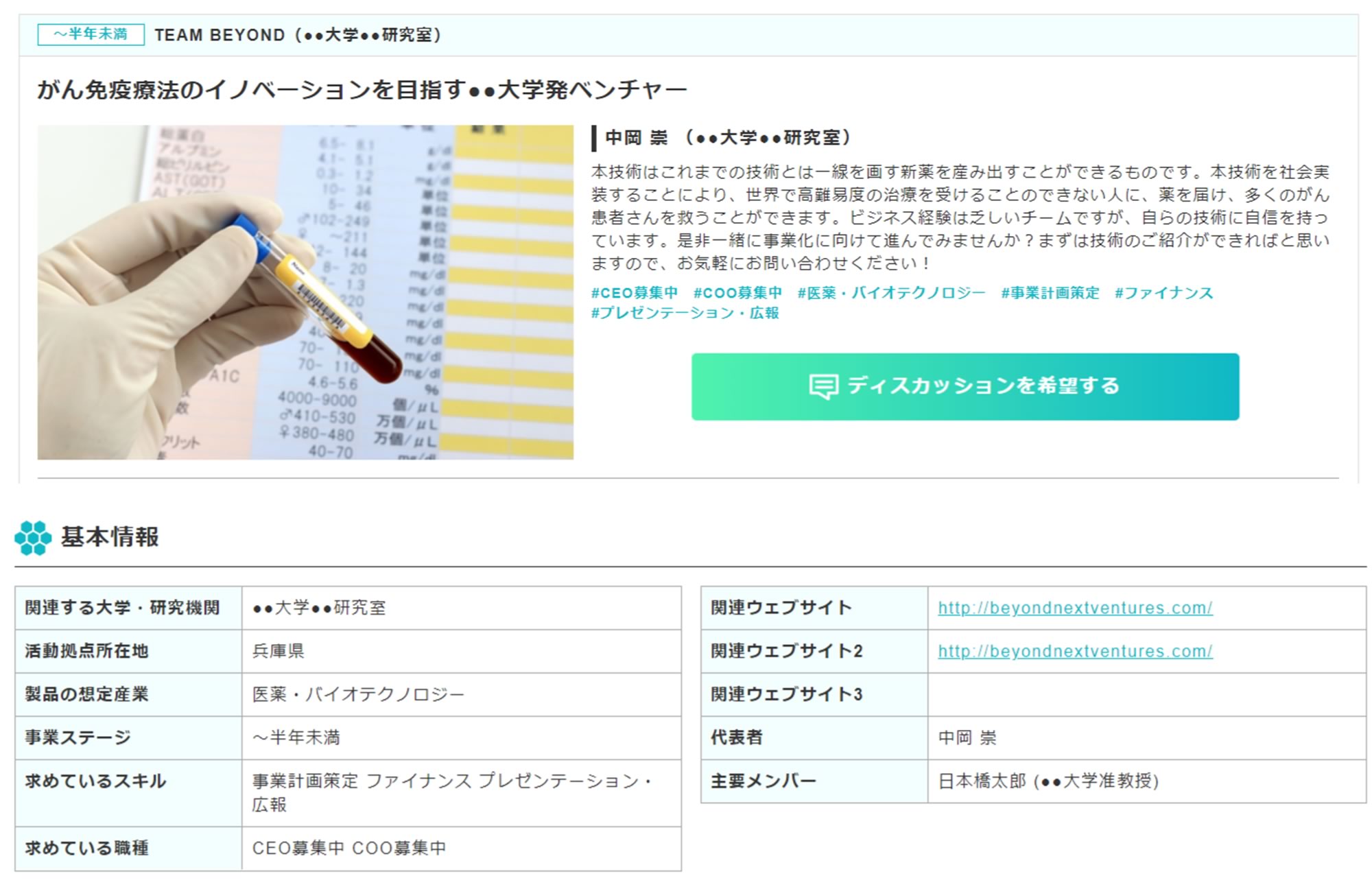 A major characteristic of Co-founders is that it greatly reduces the hurdle to successful matching by starting with an informal discussion. At the outset, the business professionals do not have to promise to participate in the research project, and thus the interaction can start from “fitting” rather than “matching.”

Substantial operation of Co-founders began in April 2019. Through this platform, 5 business personnel have joined research projects in CXO roles thus far. These matches included business personnel in Tokyo joining teams at nonurban universities, which is a distinctive characteristic enabled by this online platform that does not require physical travel.

If you seek business personnel who drive the commercialization of your technology, why don’t you try Co-founders as a first step?